The Sony Open is nearing closer and we have tennis on the brain. Mainly because there is a huge void to fill after the World Cup, and we need it filled fast. So we decided to take a hint from the success of our World Cup Hotties blog post and jump on the tennis bandwagon fast. We’ve compiled a list of the top 10 hottest tennis players in the game today, a culmination of both male and female athletic skill and just plain sex appeal. Take a look at what we’ve come up with and you’re welcome ahead of time for amping up your Friday.

Daniela Hantuchová is a Slovak tennis player turning heads on the circuit for over a decade. She reached the professional level in 1999 and had her breakthrough year in 2002, when she won her first WTA tournament, defeating Martina Hingus. The reason we chose her as one of our top hottest tennis players is because she is the epitome of the girl-next-door. She is the girl who you grew up with, that everyone crushed on because she was not only beautiful, but kicked the boys’ asses on the court. Speaking of next-door-neighbors, John Isner is the boy you wished grew up in your neighborhood. His rugged style mixed with his boyish charm makes every girl swoon. Considered one of the greatest servers this sport has ever seen, Isner achieved his career high singles ranking of World No. 9 in April 2012, and is currently the highest ranked male American tennis player at World No. 11, as of June 2014. Sounds like a dreamboat to me. 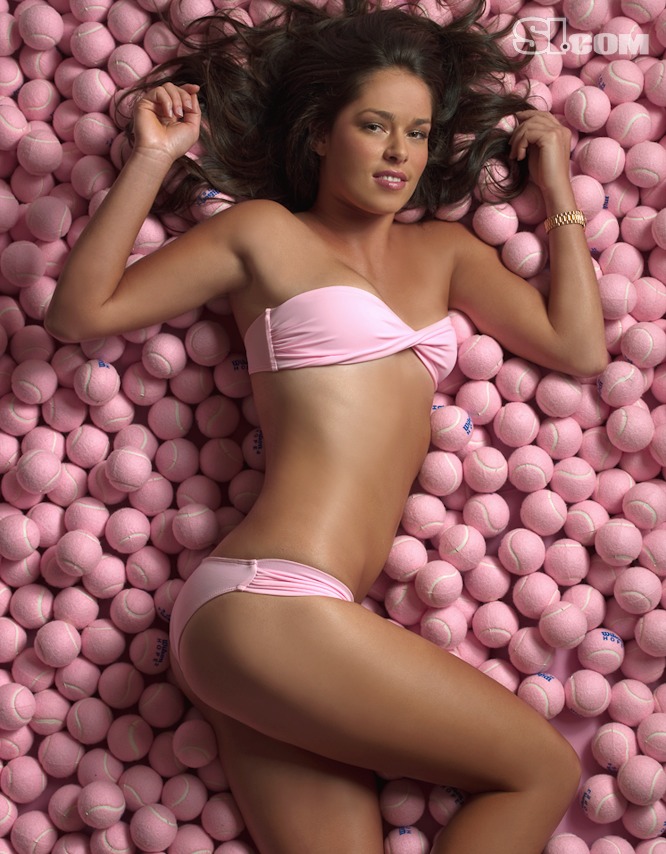 Besides the fact Ivanovic can rock the heck out of pink twist bandeau bikinis, (Side note: Trina  Turk Swimwear KILLED the twist bandeau game this past year) we’ve chosen to add her to our list because she is a cut above the rest. Ana Ivanovic isn’t all muscle and abs, she has some curves to her, which as women we can certainly appreciate. As far as her career is concerned, Ivanovic was ranked No. 1 in the world in 2008. As of August 4, 2014, she is no. 10 in the Women’s Tennis Association rankings for singles. Her native country of Serbia must be uber-proud.

We had to add him to the list. Not only is he one of the most notable tennis players in the game today, but Nadal is the Cristiano Ronaldo of the sport. Just check out his underwear spread if you disagree. Born Rafael “Rafa” Nadal Parera, and hailing from Spain, he is currently ranked No. 2 in the world. His success on clay has earned him the nickname “The King of Clay”, which makes his athletic prowess stand out from the rest. That, and his good looks.

This 24-year-old is making waves on the tennis circuit for her speed and talent on the court, and her daring beauty off. Wozniacki is a Danish professional tennis player and former No. 1 spot holder on the WTA Tour having held this position for 67 weeks. She was the first Scandinavian woman to hold the top ranking position and 20th overall. Bringing pride to her country, as well as to ours.

Fernando Verdasco Carmona is chiseled out of stone and shooting star wishes. Seriously. We can’t stop staring. But going beyond his God-like body, Verdasco’s career-high singles ranking is No. 7 in the world, achieved in April 2009. Verdasco started playing tennis at four years of age and had a full-time coach when he was eight which makes us all wonder what we were doing at eight-years-old.

Serena Jameka Williams is an American professional tennis player who is currently ranked No. 1 in women’s singles tennis. The Women’s Tennis Association has ranked her World No. 1 in singles on six separate occasions. We love Serena because she defies the conventional body type for women, revealing a very muscular and curvy figure. We can certainly appreciate the curves and the muscle definition, because girl works hard. (Side note, have you seen Serena in her high waisted bikini lately? Killin’ it.)

Tsonga is a hunk. There, we said it. Not only is he smiling all the time, a beautiful smile that would melt the hearts of women, children, and grown men, but he also stands at a whopping 6’2. Hailing from France, Tsonga is ranked No. 10 in the world. If ever you’re having a terrible day and can’t seem to get out of your funk, Google Tsonga images and make a collage of his smiling face on the desktop of your computer. It works. I mean, not from personal knowledge or anything.

Sharapova is one of our all-time favorite tennis stars to rock a Brazilian bikinis. Photographed in her swimwear often for Sports Illustrated, we can see why they keep coming back to this tennis queen. She is one of the top tennis players in the world, coming from Russia and ranking No. 6 by the WTA. If tennis doesn’t keep her content, she can always switch to modeling, clocking in at Tsonga-size 6’2. Did we mention she is dating Grigor Dimitrov?

Speak of the devil, Grigor Dimitrov is a top-10 Bulgarian professional tennis player. His career high singles ATP ranking is world No. 8, which he achieved this month! Not only is he a stud on the court, but he has this look to him where you just want to order in a cuddle on the couch. Twenty-three-years-old and taking over the tennis circuit. Also, he snatched up one of the leading ladies in the tennis game. They’re like the prom king and queen of tennis. Right?

The U.S. Open starts on August 25th, so make sure you tune in a cheer on the hottest tennis players in the game. Serve it up! The top 30 White Swimsuits for the 2020 Swim Season